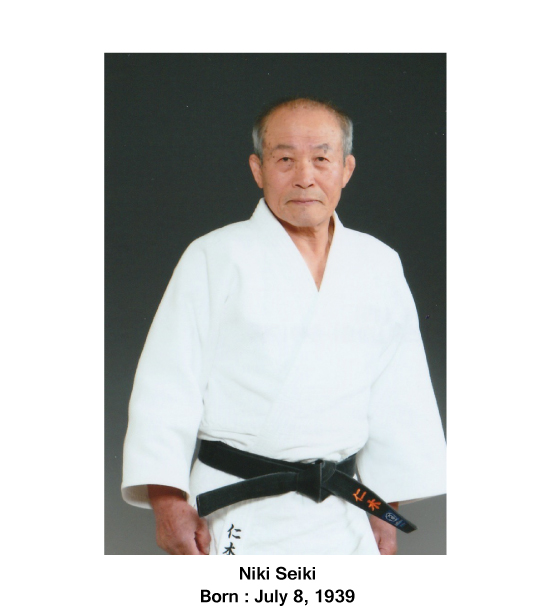 A living legend that dedicated his life to martial arts and contributed to the martial arts world as a leader for more than 60 years.

In 1955, entered Okayama Prefecture Tsuyama High School.
Tsuyama high school predecessor, Tsuyama Junior High School’s judo began when Jyutaro Akagawa Sensei who graduated from Busen arrived in 1921. Since then, the team won the national championships in 1923, 1928, 1931 and 1932, afterwards 3 consecutive seasons, in 1934, 1935 and 1936, winning in total 7 times the National Title. Their judo was mainly based on “Newaza” and was feared across the country as “Newaza’s Tsuyama Junior High”.

At that time the president / Kaicho of Okayama Prefecture Judo Federation was the great Kanamitsu Yaichihyoe, elected for life.

Master Niki, unusual for its time, as he practiced judo with the youngsters of his village while he was in junior high school, once he entered Tsuyama High School, Newaza was hammered in by older students and seniors(senpai) of Kosen Judo.
However, Japan’s judo became only Kodokan judo, the rules were also often revised, so it became difficult to win with only the Newaza of Kosen Judo.
Therefore, Master Niki started fighting using his own techniques which were based on the principle of fighting “put the opponent down and kill with Newaza” and utilizing the opponent’s force within the left-right-front-back movement. In order to make an even faster battle, he also researched wrestling and aikido (Participated 3 times at National Championships).

Judo Results · Others
The 17th National Championship – Champion (team / teacher division)
The 28th National Championship – 3rd Place (team / general division)
Even participated individually in tournaments nationwide as well as in Chugoku districts and got great results.
In addition, participate in all-Japan training camp as a 5th and 6th World Championship candidate.
After retiring as an athlete at the age of 35, he has taught at countless universities, including Nanatei universities, overseas national teams, and was the Special Coach of All Japan Women’s Judo Team.
As one of the few remaining experts in Judo, Great Master Niki still teaches to the Budokas who await him, not taking into account style, school or ethnicity.